The facility known as the Yale Sailing Center was officially renamed June 3, 2006 to the McNay Family Sailing Center at Yale University to honor a generous gift to the school’s sailing program. A dedication ceremony and reception took place at the center, located on Long Island Sound. 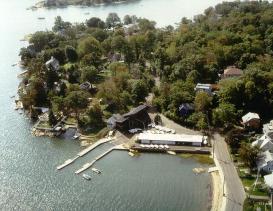 The exceptional generosity of the Joseph McNay family has provided current and future Yale sailors a top-notch varsity intercollegiate experience. The operational support of the program, the endowment of the head coaching position and the restoration of a spectacular facility have all been achieved because of this extraordinary Yale family. We could never thank them enough,” said Tom Beckett, Yale’s Director of Athletics.

The original sailing center was constructed in 1967 and renovated with the McNay gift in 2002, which also funded the women’s and co-ed teams’ move to varsity status that spring.

“I am really excited that the McNays are being recognized for a gift that allows us to take the program to the next level. They have been tremendously supportive to us in many ways,” said Zach Leonard ‘89, the McNay Family Director of Yale Sailing.

The McNay Family Sailing Center is a state of the art facility that includes offices, classroom space, lockers, a kitchen, living quarters,  and a full maintenance area. The center houses a fleet of 420 racing dinghies, augmented by FJs, Lasers and three safety launches. The sailing area is located on the open waters of Long Island Sound and boasts among the finest wind and waves in all of college sailing.

The Mcnay Family Sailing Center is the Spring and Fall home of the Yale varsity sailing team. The Varsity Team has produced scores of All-Americans, World Champions and Olympic medalists in its long history. In fact, nine Yale sailors have competed in Olympic Games winning five medals. The women’s team won the 2004 and 2009 National Dinghy Championships while the Bulldogs finished second at the 2009 Dinghy Championship.