David S. Ingalls Rink, located near the heart of the Yale Campus on the corner of Prospect and Sachem Streets, is one of the most distinguished collegiate hockey facilities in the country. A major renovation in 2008 and 2009 has preserved that tradition while also dramatically adding to the usable space in the facility thanks to an underground addition. 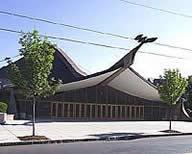 The home of Bulldog men’s hockey since 1958 and women’s hockey since 1977, the rink has been dubbed the “Yale Whale” because of its hump-backed roof and arching, 300-foot backbone designed by renowned architect Eero Saarinen (although it has been said that the design depicted the grace involved in skating). Shortly after it opened, Ingalls, which replaced the New Haven Arena (1927-59) as home of the Elis, was featured in Sports Illustrated. The construction cost was $1.5 million, which was twice the orginal budget.

The arena is named in honor of David S. Ingalls ‘20, who twice captained the Yale hockey team, and his son David Jr. ‘56 who served as captain of his freshman and varsity teams. Gifts from the Ingalls family provided the bulk of the funding for its construction.

The rink, with a capacity of 3,500, is made of concrete with an aluminum roof supported by cables. The famous ceiling is 76 feet high at its zenith. Ingalls also contains a weight room, locker rooms, and a reception room – the Schley Room – that houses Yale team photos dating back to 1895.

Ingalls’ playing surface, which is 200 feet long and 85 feet wide, is among the best in the country.