Coxe Cage is the home of the Yale men’s and women’s indoor track and field teams. In 2005, Coxe Cage underwent major renovations, installing a banked Mondo track as well as a Mondo infield. The renovations were able to take place due to the generosity of Donald M. Roberts ‘57, who named the track the Frank Shorter ‘69 Track, to honor the former Yale cross country captain and two-time Olympic medalist. A new digital scoreboard was installed as well.

The Cage was named for Charles Edmund Coxe (1893), a hammer thrower on Yale’s squad. Legend has it that Coxe, who was charged with raising funds for the new facility, could not be bothered with such efforts and instead offered the necessary $300,000 to build the facility on the stipulation that it be named for him. Yale accepted the offer and began construction on what was then considered to be one of the largest structures of its kind in the world. Measuring over 356 feet long and 156 across, with a ceiling reaching almost 83 feet, the building encompasses over 3.3 million cubic feet of air space. To this day its 26,000 square foot skylight is among the largest anywhere. At the time of the Cage’s construction, its track was designed to be one of the fastest in the east. At the opening ceremony for the new facility, Yale’s half-mile relay ran an exhibition in a time of 1:32.4, better than any previous indoor mark. 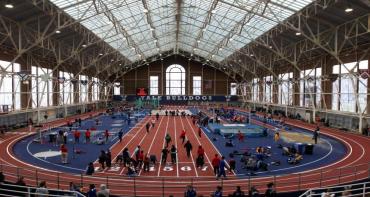 In 1982, Coxe Cage also underwent major renovations. The old cinder track and dirt floor were removed in favor of a state of the art, “tuned”, En-tout-cas oval and infield. The track was mounted on a structure designed to allow the runner to train more consistently without suffering the strain and injury incurred on other surfaces. At the time of its installation it was thought to be the most advanced track of its kind. In 1988, another track was installed.

All field events can be contested within the oval, including the shot put and weight throw.